Keringkam and Songket are two of the most precious heritages of the Malay community in Sarawak. Painstakingly produced by hand, they fetch high prices and were once worn only by the nobles of Sarawak. The fine arts of keringkam embroidery and songket weaving are still alive and well today, and efforts are being made to preserve and conserve these precious crafts. 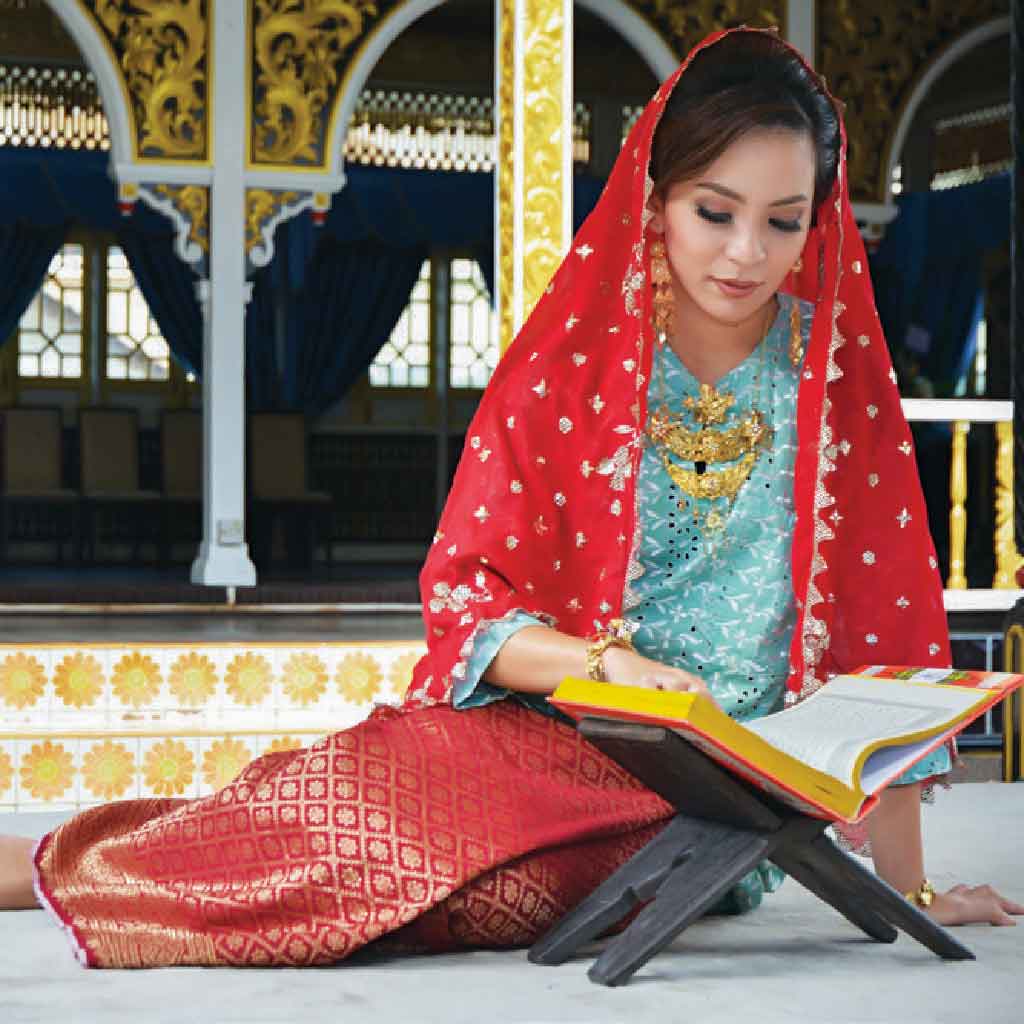 Keringkam, the traditional art and craft of gold embroidery is the pride of Sarawakian Malay women. Instead of threads, thin gold or silver plated ribbons are threaded through a special flat needle created just for this purpose, and embroidered onto sheer fabrics such as voile, kasa rubia or silk organza. This is a meticulous process that can take months to complete. A fully embroidered piece usually finds purpose as a luxurious head covering called ‘selayah’ or selendang (scarf), which Sarawakian Malay women use to adorn themselves for special occasions. No Sarawakian Malay wedding garment will be complete without a Keringkam accessory to add prestige to the event.

Margaret Brooke, the Ranee of Sarawak adored the Keringkam and even wore it on many occasions. “I was taken aback by the charming sight of that awaited me as I entered the dining-hall. The rows of women and young girls seated on the floor round the room, with their silken brocades and gauzy veils of rose, green, blue and lilac, reminded me of an animated bed of brightly coloured flowers. I noticed that what beautiful complexions most of these women had, of the opaque pale yellow kind, like the petals of a fading gardenia…” she was quoted as saying. Songket symbolises the hand-woven textile of the Malays. The term Songket is derived from the Malay word, leveraged with woven yarn (gold and silver). There are some evidence that since the 16th century Songket has been created in the region, which became the official dress of the Malay nobility. The Songket was woven by the Malays who inhabited coastal areas exposed to external influences.

Traditionally, Sarawakian Malay women would pair Songket with Keringkam, while the men would wear Songket as ‘sampin’ (cloth worn by Malay men around the belly, covering the stomach up to the knees or just below them) or ‘sabok dua jari’ as an accessory to the Baju Melayu and Songkok (cap typically worn by Muslim men). In creating the motif of Songket, Sarawakian Malays stayed true to their Islamic belief and centre most of their inspiration around the cosmos and flora. Weavers would form stylised patterns based on the abundance of nature around them – the rose, leaves and ‘daun paca’ (leaf of the Mulberry plant). However, some motifs are also based on the beauty and symbolic meaning of certain animals like the sea horse, peacock, rooster and duck. This project, which is under the patronage of Datuk Amar Datin Patinggi Hajah Juma’ani Tun Tuanku Haji Bujang as its patron, the project is a joint venture between Old Kuching Kampung Heritage, Universiti Malaysia Sarawak (UNIMAS), Tun Abdul Razak Teachers Training Institute as well as CENTEXS, with the Keringkam and Songket community. A model that is based on community participation to ensure its sustainability.