The different religious beliefs in Sarawak resulted in the establishment of many different houses of worship, some of which truly stand out in terms of their architectural features, and have become must-see attractions for tourists, especially those who come here to discover Sarawak’s rich heritage. We list here some of the prominent places of worship. Some old, some brand new, but equally astonishing and worth a visit.

This historical Anglican cathedral located at Jalan McDougall was completed in 1953, 100 years after the consecration of the first Bishop of Sarawak, Frank McDougall in 1856. The church building we see today was built to replace the wooden one constructed by McDougall in 1857. It features a mid 20th Century British architectural style and a red barrel vaulted ceiling. This grand Catholic cathedral at Jalan Tun Abang Haji Openg was constructed in 1969. Its award-winning architecture features a high tower-like front with wings on either side. The interior is a spacious array of benches and a ceiling hovering high above in the central altar, all covered by wood panels to the top. The iron grill walls feature stained glass depicting crucifixion of Jesus. Sri Aman’s uniquely shaped Mount Hosanna Chapel sits on a picturesque hill, flanked by lush trees on the sides. What makes the building iconic are its three towers located at the entrance that resemble three white candles. To get to it, one needs to climb 185 steps up to the chapel. Seen from afar, the chapel also looks like an old white castle on a hill. A beauty to behold indeed. Otherwise known as the Old Kuching State Mosque, this icon located on a hilltop at Jalan Masjid was built in 1968 to replaces the original wooden Masjid Besar, built there in 1847 by Datuk Patinggi Ali. Its Mughal-inspired design, ornate chandelier hanging from the main dome and its gilded cupolas make it one of the city’s most striking landmarks.

This mosque in Miri features stunning architecture and a beautiful golden dome. Built some 30 years ago, it is one of the largest mosques in Miri, and features meeting rooms, a library and facilities for funeral preparations, among other things. The At-Taqwa Mosque is also one of the most photographed mosques in Miri. A new landmark on the Kuching Waterfront, this mosque is built on a platform over the Sarawak River opposite the original mosque at Gambier Street formerly known as Masjid India Kuching. The mosque is illuminated at night, adding to the charming night-time vista of the scenic Kuching Waterfront.

This temple dedicated to the Deity of the North was built by Teochew immigrants from China more than one and a half centuries ago at Carpenter Street. It underwent rebuilds in 1863 and again in 1884 after a fire razed it to the ground. In 1968, major renovations saw statues of Deities in the temple covered in gold foil. A grand procession is held annually on the 4th day of the 12th month of the lunar calendar to commemorate the occasion. Otherwise known as Siew San Temple, it has been in existence since 1770 and underwent extensive reconstructions in 1856, 1965 and 2002. The site was carefully chosen according to the principles of feng shui, to bring about peace, harmony and prosperity to the Chinese community in Kuching. When Sir James Brooke fled to Singapore in 1857 during the Chinese uprising in Bau, he came back after that with 13 Sikh recruits for the Sarawak Police Force, and later on more Sikhs came into Sarawak. This led to the construction of a wooden Sikh temple in 1912 to cater to the Sikh families that live here. It was replaced with a new one made from bricks and featuring a golden dome, and was opened in 1982. It became a prominent landmark and a monument for the Sikh community in Kuching. 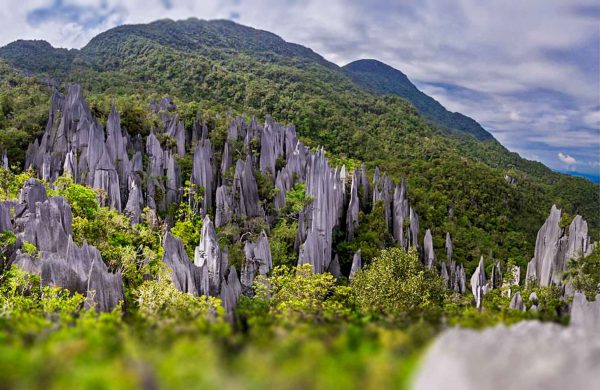