Mankind has come a long way since we first put on an item of clothing for the sole purpose of protecting ourselves from the elements. Throughout the course of history with the emergence of culture, man began to create unique identities for themselves through clothing, reflecting their beliefs, rules and values that can be clearly seen in the motifs, materials and colours used.

Sarawak has a large collection of traditional clothing, each characteristically unique and remarkable in their representation of the 27 different ethnic groups that live here. Their designs are evocative of the traditions and steep folklores of their wearers, passed on from one generation to the next.

Many are still being worn today, although mainly on special occasions to highlight the richness of culture and traditions in Sarawak, which are still alive and well-preserved.

Meanwhile, the ngepan laki consists a short-sleeved vest called kelambi and a sirat (loincloth) embellished with elaborate motifs at the end of the fabric. A parang ilang or Iban sword completes the look, along with belt, armlets and anklets made from silver as well as a labong (turban style headgear). The Land Dayak or Bidayuh have simpler costumes, with their women wearing short-sleeved or sleeveless blouse and a jomuh (skirt), accessorised with pangiah (beaded necklaces), porik (metal belt) and a sipiah (headgear), with a selapai sash to complete the look.

An elaborate ceremonial necklace with large coloured glass and earthen beads strung together with animal tusks or claws called a sembon was traditionally worn by Bidayuh chieftains and shamans. Some of the old beads are used in “child naming” ceremonies and are believed to have supernatural powers to ward off evil spirits.

Bidayuh men traditionally wore a long loincloth called tawuop tidily wrapped around the body with one end hanging down in front, a headgear called burang sumba made of red cloth with a narrow border of golden lace, and the occasional armlets called kima.

The Melanau people are almost similar to the Malay folks in terms of their traditional attire, although there are several variations of the Melanau costume. Melanau men traditionally wore the baban, which is still being worn to this day, albeit mostly on special occasions. The baban bears resemblance to the baju Melayu worn by Malay men and includes a fit in jacket cut tunic, completed with a brocade samping around the waist, a waistband and style headgear similar in style to that worn by Javanese men.

For the female member of the Melanau community, their traditional attire is almost similar to the Malay baju kurung. The components include satin blouse in black, songket worn as a sarong, chest decoration and a majestic headgear. The folklore of the Orang Ulu people tells of warriors and heroes bestowed with supernatural powers when they put on special jackets made from the pelts of clouded leopards and bears.  Some were embellished with hornbill feathers and pangolin scales. Now faux pelts, feather and scales are used instead.

Another distinctive feature of the Orang Ulu traditional clothing is their hat, which features beaded panels, patchwork and rosettes. Jewelleries such as bracelets are made from easy-to-find materials such as ivory, wood, silver and brass. Earlier beadwork, waist belts and skullcaps were made from semi-precious stones like cornelian, agate and clamshells. Today, smaller decorative glass beads are used as they are easier to obtain. See it all in one place 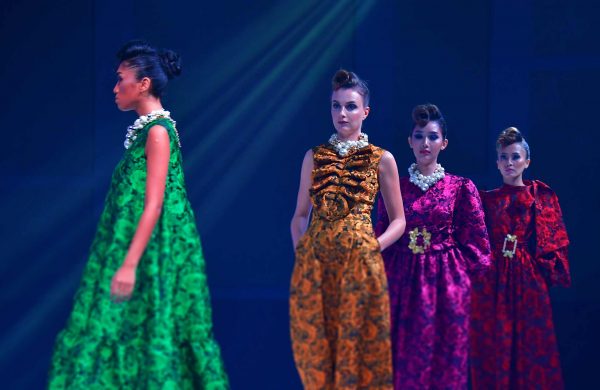