On January 25, non-profit organisation (NGO), The Sarawak Initiatives (TSI) announced funding for a research initiative to map and evaluate the conditions of all existing ‘kelirieng’ of the Punan communities in Belaga and Kapit.

The NGO will be supporting Dr Elena Chai, a senior lecturer at Universiti Malaysia Sarawak (UNIMAS) in the Department of Anthropology and Sociology for her project titled ‘Community Heritage Assessment of Punan in Sarawak: Mapping of the Kliriengs’.

But first, what is a kelirieng? From afar, it looks like a totem pole, but up close, it’s an imposing figure (about 50 metres tall!) that evokes a sense of mystery and even unease. Especially since it’s a burial pole, and every pole required a human sacrifice, but more on that later.

Keliriengs aren’t made for just anybody though; they’re made for beloved leaders and aristocrats of the Punan community and are a secondary burial treatment, often done in the following year of their death.

The Punan, or more accurately, the Punan Bah, lives in the upper reaches of the Rajang River in Sarawak. They’re not to be confused with the nomadic Penan tribe, who spoke different languages, had different customs and live in different places. The Punans also have a social class classification, headed by aristocrats and royalty, followed by commoners and at the lowest, slaves. More importantly, they practice vastly different death customs.

The Penans bury their dead almost immediately, while the Punans take care of the remains at home for a period of time, depending on the gender and social class of the deceased. The Punans also practice a secondary burial custom, which is where the kelirieng comes in.

The Kelirieng is made of belian wood, and once a large tree is selected, it is chopped and brought over to the village by the men. The trunk is then handed over to a trusted craftsman, who is responsible for a flawless carving. The carver must not only be a master at his craft, but also highly knowledgeable about the local customs and traditions, as every shape carries significant meaning. One kelirieng can take three to five years to complete.

One of the main reasons why this ritual was abandoned in the late 19th century amid pressure from the Brooke government was because of the element of human sacrifice that comes with every kelirieng. Someone, usually a young female slave, is crushed by the kelirieng as it’s being erected. This is to ensure that bad fortune doesn’t befall the people.

Once the kelirieng is erected, the secondary burial takes place during the next harvest season. The remains of the aristocrats are placed into jars called tajau, which are then lifted and placed into the kelirieng. The more important you were, the higher of a compartment you’ll be placed. A single kelirieng can have multiple compartments for different royal family members. Each compartment is then covered with fast-decaying wood like empelai and meranti.

There are currently 7 kelirieng still standing in the Punan Bah area, as four were destroyed in a longhouse fire in May 2008. The rest were either left unmaintained or swallowed up by nature. In October last year, two broken kelirieng were spotted at the Penyarai River, brought down from the upper river by the heavy rain.

The core objective of Dr Chai’s research is to map out all existing structures and assess their conditions, which will hopefully create a strong awareness of the rich Punan heritage in Sarawak and expedite conservation efforts from the state government and relevant ministries. The research will also take inventory of the motifs and designs on each kelirieng using cameras and drones as well as its relationship with the community through interviews with family members.

The research have already compiled 28 sites in the Kapit and Bintulu divisions and are also on the lookout for the unknown ones within the area. Conserving these important pieces of Punan history is a race against time, as the threat of time continuously ravages these cultural heirlooms.

You can spot one of these kelirieng in the compound of the Old Sarawak Museum, two in the grounds of Kuala Lumpur’s Muzium Negara and one in Brunei. 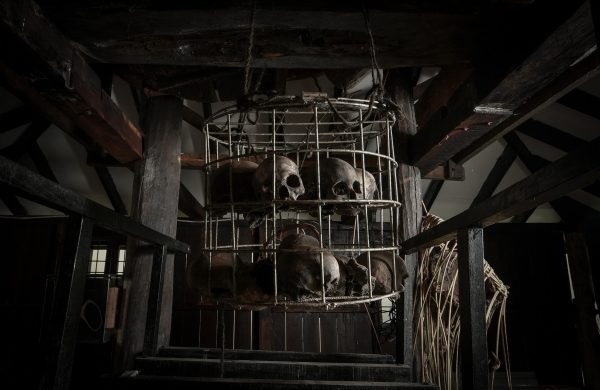