As the name suggests, Wind cave got its name from the constant rush of wind blowing through its chambers as the cave has openings on both ends. Located in Bau, it is just mere minutes drive away along Bidi road and the signposts easily guide you there. There is a big parking area at the entrance and stalls selling food and drink, as this is one of the favourite weekend spots for city folks to come for a relaxing time with the family. Apart from the great natural beauty of the surroundings, this nature reserve also has a small beach area along the river that runs past the entrance and this is where most of the water fun activities take place. 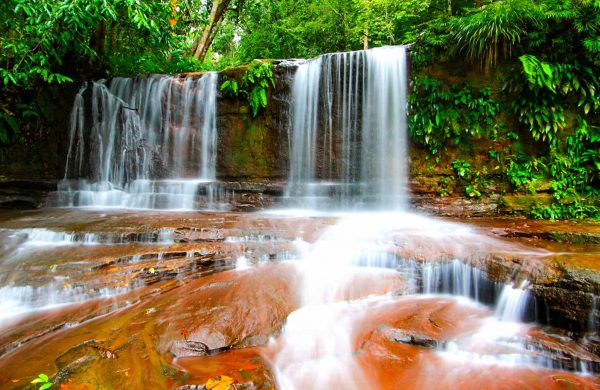 One of the famed national parks for its botanical diversity Lambir Hills National Park in Miri is a wonderful recreational area with waterfalls and pockets of hill slopes for excellent picturesque experience and naturally. With a land area of 6952 hectares, it is one of the smaller parks in Sarawak. Fairy cave in Bau is a must-see for those who love nature-cave photography as this limestone cave is just minute’s drive from the town. Word of advice here is that you have to climb some four flights of stairs to reach the entrance! The view from the top is naturally breathtaking to say the least – the surrounding countryside marked by fields of rice cultivation, crops and wild forest stretches over the horizon. The Semenggoh Wildlife Centre was established in 1975 to care for wild animals which have either been found injured in the forest, orphaned, or were previously kept as illegal pets. It has been a resounding success, caring for endangered mammals, birds and reptiles from dozens of different species. However, it is the orang utan rehabilitation programme that has made the Centre famous. In one respect, Semenggoh has been too successful – so many orang utan have been successfully reintroduced into the surrounding forest reserve that the forest’s carrying capacity has been reached, and rehabilitation activities have been transferred to the Matang Wildlife Centre, part of Kubah National Park. The different religious beliefs in Sarawak resulted in the establishment of many different houses of worship, some of which truly stand out in terms of their architectural features, and have become must-see attractions for tourists, especially those who come here to discover Sarawak’s rich heritage. We list here some of the prominent places of worship. Some old, some brand new, but equally astonishing and worth a visit. Standing at just 1,600 feet above sea level, Bung Jagoi – a small mountain within the Jagoi area in Bau – hides in it a very old Bidayuh settlement. Located near the top of the mountain, the village was nearly altogether abandoned. Today it has become a heritage area, and Bung Jagoi is also drawing visitors who either come here to see remnants of the Bidayuh’s past or to enjoy a scenic hike minus all the obstacles that usually come with it. For city folks such as I, a trip out of the urban jungle presents a much-needed opportunity to reinvigorate the mind, body and soul, and broaden one’s horizons. So when opportunity knocks, I will answer without a moment’s hesitation. That opportunity came knocking last October, when I was invited on a media familiarisation trip to Belaga, a small district in the Division of Kapit, Sarawak. Having never been there before, the trip was a journey of discovery of many things previously unknown to me. And I got to make new acquaintances, with whom I shared an exciting week-long adventure.