STB works relentlessly to realise its main objective of positioning Sarawak as a prime destination for culture, adventure, nature, food and festival, or CANFF in short. Their efforts are also geared towards increasing tourist arrivals into the State. STB goes by leaps and bounds in creating awareness among the trade, media and public on the diversity of tourism products in Sarawak regionally and internationally.

CEO of Sarawak Tourism Board, Sharzede Datu Haji Salleh Askor says it is STB’s role to stimulate the tourism industry to a different level, that they connect all the dots so that they can promote and market the products and services of the tourism industry better. Also, competition from emerging destinations means that it is crucial to develop local tourism products, including price and packaging while advancements in the digital era means that STB must come up with non-conventional marketing initiatives to keep with the times.

STB’s promotional focus for the year 2019 is to attract five million visitors into the State. This is achievable by collaborating with all stakeholders in the tourism industry to enhance Sarawak’s presence in the global tourism map. In the previous year leading to Visit Sarawak Campaign 2019, STB worked hard in preparing for this important tourism year, including coming up with a fresh new campaign to invite the world to come experience Sarawak and all it has to offer.

Part of this was the launching of Sarawak’s new tourism strap line ‘More to Discover’ to highlight the State’s offering of culture, adventure, nature, food and festival that are not found anywhere else in the world.

“We have a kaleidoscope of cultures here, as we have over 27 ethnic tribes who contribute to our rich diversity. Sarawak’s people are likea rich tapestry, woven of different coloured threads into one cloth, united in our shared values of hospitality and warmth. In Sarawak, one arrives as a guest, and leaves as family,” Sharzede speaks of one of the components in the CANFF.

Adventure seekers will never be short of things to do and places to go. Jungle trekking, adventure caving, mountain climbing, rock climbing and jungle expeditions are just some of the things to experience under the ADVENTURE component of the CANFF. Adventure also comes in the form of river activities, diving, water sports, fishing and yachting and plenty more.

“For nature lovers, we have 56 totally protected areas, 42 gazetted national parks, five wildlife sanctuaries and 14 nature reserves for exploration. From hornbills to Orang Utans, to flying squirrels to the proboscis monkey, and the Rajah Brooke butterfly, the world’s richest and most diverse ecosystem here that makes for the most exciting expeditions,” said Sharzede.

The Festivals component of STB’s CANFF proposition talks about the myriad of events and carnivals held throughout the year. These include culturally-driven festivals such as Kaul, which is celebrated by the Melanau, music extravaganzas like the globally acclaimed Rainforest World Music Festival and Borneo Jazz, and so many other festivals that make Sarawak such a happening place to be.

The final component of CANFF highlights the plethora of food we have here in Sarawak. From the iconic “manok pansoh” and “Sarawak laksa”, to the must-have “kolo mee”, delicious “kueh chap” and the signature dish of the Melanau akin to the Spanish ceviche called “umai”, the choice seems endless. Some of Sarawak’s foods have won international recognition, such as the Sarawak laksa and the highly prized Sarawak black pepper.

Sharzede stresses the importance of Experiential and Responsible Tourism as the way forward. And for the Visit Sarawak Campaign, these are where STB’s focus is directed towards.

When speaking at STB’s Kuching Media Appreciation Night in November, she said, “During VSC, we are focusing increasingly on responsible tourism. Travellers are becoming more determined in making sure their travels reflect their own personal beliefs, focussing spending time and money in ways that contribute directly to the local communities, as well as being as sustainable as possible. Things like city cycling tours that reduce a traveller’s carbon footprint are becoming more and more popular. We are doing our own part, of course, by reducing and reusing waste in our own event, the Rainforest World Music Festival, be it turning our old promotional material into tote bags, or turning food waste into fertiliser.”

She went on to say, “Experiential tourism is also on the rise, with visitors not wanting just a simple day trip. They want an experience that will resonate with them on a more emotional level, creating a memory that will stay with them forever. It is our task to show them that Sarawak holds such experiences, just waiting to be discovered. With the use of Augmented Reality and Virtual Reality, or AR and VR, we have a way of giving potential visitors a glimpse of what Sarawak has to offer, to sell them the dream. And once they believe in the dream, they have to come here to see it come true. From there, they experience our diverse products and attractions in Culture, Adventure, Nature, Festivals and Food.”

Winner of many accolades 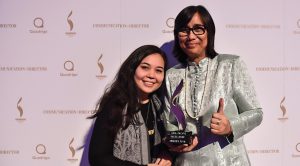 For its hard work in promoting and marketing Sarawak as a globally renowned tourism destination, Sarawak Tourism Board was honoured with many accolades in the past, and continues to do so. Some of their awards include the he Hospitality Sales and Marketing Association International (HSMAI)’s Silver Adrian award for Travel Marketing Excellence in Public Relations, Gold Prize in the Print Campaign Category at the Das Goldene Stadttor (Golden City Gate) Awards and a PATA Gold Award (Marketing Media, Print Advertisement) in Macau, just to name a few. Theirlatest accolades include two awards for their Rainforest World Music Festival – Malaysia Tourism Council Gold Award 2018 under Tourism Event and Asia Pacific PR Excellence Award 2018 under Film & Video category.

STB is currently at a pace where there is no slowing down, with more initiatives in the planning, all in effort to make Sarawak a true globally recognised tourism destination in the future.

“This land is unlike anywhere else on earth, and I would like to give everyone the opportunity to understand, know and love it as we all do. Being a Sarawakian myself, I believe there is truly no other place in the world like this. Sarawak is deeply and richly part of us all here at the Sarawak Tourism Board, and we would like for Sarawak be a part of everyone too,” Sharzede says.

Bringing Sarawak to the world
0
0
Write a response