Bau, Sarawak is a quaint town located about 36 kilometres from Kuching, and is popular for its limestone caves and rich history. It used to be a bit of a sleepy town, but with the completion of the Semadang-Skio road, Bau has been welcoming visitors from nearby Serian, Padawan and Penrissen, as well as travellers on their way to border town Serikin.

At the heart of Bau is Tasik Biru, which is Malay for Blue Lake, named so because of its unnaturally blue colour, which is a result of high levels of arsenic. Tasik Biru is a man-made lake and was originally an open mining pit. Gold mining began there in 1820 by the Hakka Chinese, who named it Tai Parit, which means ‘Big Drain’ in Hakka.  A century later, mining efforts were abandoned when the 91-metre deep pit flooded with water. There are many myths and stories surrounding this particular body of water.

On June 7 around 12.50pm, a trainee teacher and 29 students from the nearby SMK Lake drowned when a school bus carrying a total of 67 passengers plunged into the river. Witnesses nearby rescued the remaining 37, which included the bus driver, the conductor and other students.

According to the book The Land of Freedom Fighters written by Chang Pat Foh, in a story told by an elderly miner, a human-shaped stone was removed from the bottom of the lake, angering the deity in the stone, who flooded the lake as revenge.

In 1988, a crowd of people gathered and watched as three strange creatures swam beneath the surface of the water. These dark figures were about three metres long, and were seen for over a week. A medium from Bong Low Sian Tze temple was consulted on the matter, and he referred them as evil beings. Wasting no time, he asked his assistant to burn some talisman at the four corners of the lake. Two days later, the dark beings disappeared.

It was said that in 1921, a group of miners stumbled upon a golden tortoise at the bottom of the lake. When they tried to catch it, the tortoise bored into the earth. The more frantically the miners hacked, the deeper it went, until it hit a water source and the mine started to flood. Frightened, the miners scrambled for high ground but the water kept rising, threating to wipe out the mining settlement. An old man then appeared on the scene and proceeded to push a man into the rising water. Strangely, this worked.

One look at the scenic turquoise lake, you’ll never guess the bloody history or the poisonous waters that comes with it. Today, Tasik Biru at Bau is open to visitors as well as many water activities such as kayaking, bamboo rafting and even miniature sail boat racing especially during the annual Tasik Biru Festival. However, due to the lake’s arsenic content, thanks to its history of gold mining, visitors are advised not to fish, drink, swim or bath in this man-made lake. 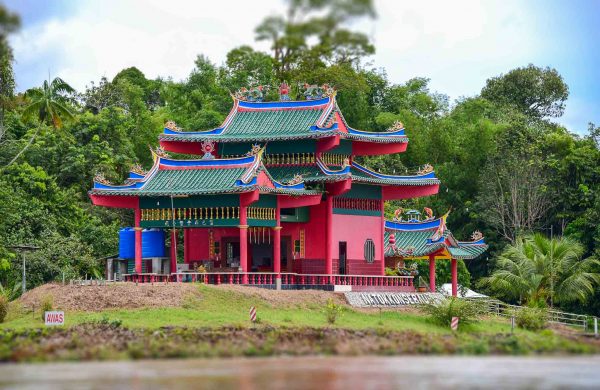